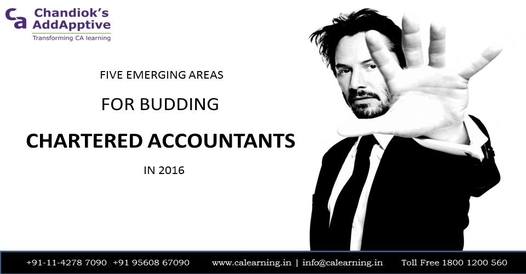 Chartered Accountant profession is undergoing a series of changes in 2016. These changes are required to be updated and refreshed by a young budding CA on a continuous basis . In an era of constant change there is a need to keep oneself regularly update.

Firstly, the laws and the procedures of Company law are changing at a great   pace which are reflected through constant updates coming from the Ministry of Corporate Affairs.

Secondly, Taxation both direct tax and indirect tax are going through regular amendments which is required to be read along with lots of court judgements, circulars and notifications. A CA has to be abreast with the latest developments so that he can be helpful for the clients.

Thirdly, IND-AS will be put in to practice in the Phase 1 in the financial year 2017-18. Lots of changes are going to come in the accounting representation. Annual reports will get changed. Hence a young professional is required to be constantly upgrading his skills on a regular basis.

Fourthly, a young professional must be able to see all the aspects of the business in totality. Each business is a set of processes. He must be able to apply activity based costing, cost reduction and Kaizen costing with in the organization based on the requirements.

Fifthly and finally, CA should not look business in isolation but he must apply an interdisciplinary approach. He must also know Economics, Psychology of people, negotiation skills, International economic development and as well as polity. Everyday he must study a minimum of one hour to keep himself professionally update.This is useful because no business can survive only focusing on the internal factors. A CA must also be capable to analyse all external factors quickly.

Messie was born to a steel factory worker . He started playing football at an early age of 5. At the age of 11, he was diagnosed with a growth hormone deficiency. Carles Rexach, the then director of Barcelona was aware of his talent. After watching Messie live in action, Messie was offered the compensation of the medical bills  by Barcelona Clubon the condition that he would move to Spain and play for the club.

Messie had a passion at an early age. Now he no longer plays football but he is a legend far ahead of Ronaldo or Beckham. He was announced a goodwill ambassador for UNICEF in 2011. He has created Leo Messie foundation – a charity helping weak children with regard to healthcare and education.

I am sure that every one of you doing Chartered Accountant Course is a Messie in making. You can peak and excel any height only when  you are passionate in the area of your work. No one is successful when they were born. It took years of passionate hard work which created the wonderful professional to come up at the global level. Hence a chartered accountant student must be passionate and clear about the goal and he must be focused on it like an eagle. So, everyone of you can become a Messie in your field.

The Institute of Chartered Accountants of India has notified the exam dates for CA IPC & Final November 2016.

Payment of fees for the examinations should be made by Demand Draft only. The Demand Drafts may be of any Scheduled Bank and should be drawn in favor of The Secretary, The Institute of Chartered Accountants of India, payable at New Delhi only.

Applications for admission to Intermediate (IPC) examinations are required to be made either online at http://icaiexam.icai.org free of cost (i.e. Rs. 1000/- for Intermediate (IPC) candidates for the cost of application form shall not be charged if applications are filled in online) or in the relevant prescribed form, copies of which may be obtained from the Deputy Secretary (Examinations), The Institute of Chartered Accountants of India, ‘ICAI BHAWAN’, Indraprastha Marg, New Delhi – 110002 on payment of Rs. 1000/- per application form in respect of Intermediate (IPC) and Final Examination candidates. The forms shall also be made available in the Regional and Branch Offices of the Institute and can be obtained there from on cash payment on or from 5th August, 2016

Applications together with the prescribed fee by Demand Draft of any Scheduled Bank may be sent so as to reach the Deputy Secretary (Examinations) at New Delhi not later than 26th August, 2016. However, applications will also be received at Delhi Office after 26th August, 2016 and upto 2nd September, 2016 with late fee of Rs. 600/-.Applications for the students’ examinations only duly filled in will also be received by hand delivery at the office of Institute at New Delhi and at the Decentralised Offices of the Institute at Mumbai, Chennai, Kolkata, Kanpur, Delhi, Ahmedabad, Bengaluru, Ernakulam, Hyderabad, Indore, Jaipur, Nagpur, Pune, Surat, Thane and Vadodara upto2nd September, 2016. Candidates residing in these cities are advised to take advantage of this facility. Applications received after 2nd September, 2016 shall not be entertained under any circumstances.

CA Learning wants to screen and shortlist 100 bright examinees throughout India who are continuously repeating the CA Final exam. CALS 50 invite such students to choose any one paper in Group-II for November 2015, CA Final Examination and send us the answer for review by 30th July, 2016. It will be evaluated and recommended for improvement by the experienced experts who are aware with the ICAI copy checking guidelines.

We’ll let you know whether you are chosen into our CALS-50 (CA Final Group-II Success Program) which will start on Saturday, 06th August, 2016 and will intensively run till exam date. It is open to only such students who will be completely dedicated for this programme. They must have secured a minimum 160 marks in the group. Out of 100 such potential students, we will choose a maximum 50 serious candidates through our screening process.

CALS 50 will be conducted on weekends and will work on improving the concepts, writing skills, revisionary skills, understanding questions and individual counselling for the CA Final Group-II.

CA Final results has been declared, today 18th July, 2016. Best of luck to you. If you have passed and need career guidance, you are welcome to contact us. Just to inform, CA Learning has created three rankers in Top 50, Merit list.

If you want you may register @ cals50@calearning.in or call 7838360418 to fix an appointment for the above program.

Every professional needs to under do skill upgrade on a continuous basis in a changing world. It requires quality learning and practical application.

Firstly, a professional must have knowledge update and hence he must read the latest development in the professional world. He must also attend the training by the experts including webcast on the regular basis.

Thirdly, a professional must have leadership ability to improve the skills of the junior staff. He must drive the vision of the business and its stakeholders. He must develop a business strategy which is suitable in both short and long range of the business. He must operationalize the business objectives on a long term rolling basis plan.

Fourthly, interpersonal behavioural skill development is a hall mark of the business development and consumer satisfaction. It requires good communication, reciprocity and positive working attitude which fuels the business growth. Also there is always a scope of skill enhancement in human behaviour arena.

Fifthly, networking with the professionals with in the same skill set is highly desirable when globe is such a small place to function. Networking gives more business potential and growth opportunity and therefore a professional must be always be in a networking mode.

Not only undeclared cash, property or assets that can trouble you with income tax notice, there are many other reasons that can make you face tax authorities. These reasons may be not deducting TDS or not filing ITR even if you have paid the taxes. New rules have made tax compliance very strict, every year tax department comes up with new forms and rules to plug the tax leaks and department is catching upon the defaulters. Online income tax return filing and quoting PAN numbers and bank account details for all the transactions have made tracking easy for the tax authorities. Every year thousands of taxpayers receive notice for discrepancies found.

Let’s see some of the common mistakes that fetch you a tax notice: